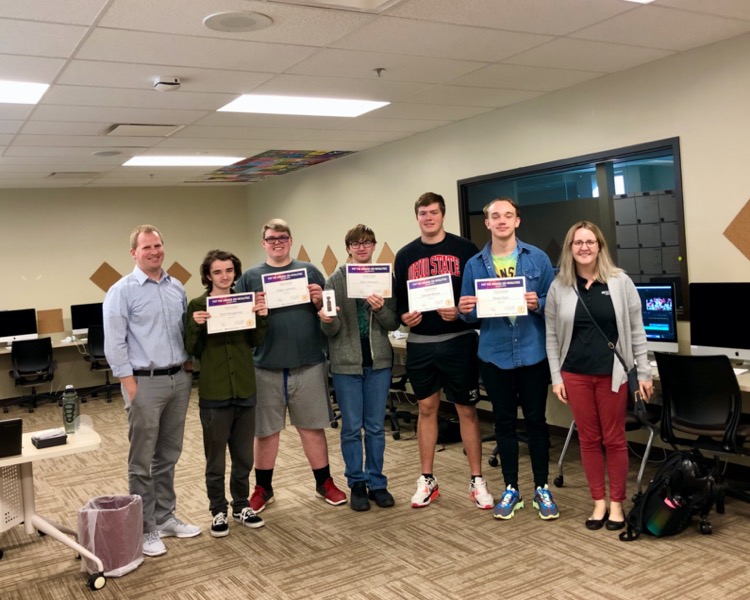 Lansing High School students in Mr. KC Simmons's third hour video production class won the grand prize in this year's Put the Brakes on Fatalities Video Contest through the Kansas Turnpike Authority. The contest ran from August 1st through September 29th and was open to students in grade 8-12 from across the state of Kansas and the Kansas City metropolitan area. To compete, students were to create videos that had to be between six and sixty seconds long and promote motorist fatality prevention. Suggested themes were distracted driving, seatbelts, or texting while driving.

Lansing students Torin Baughman, Gabriel Johnson, Tyler Johnson, Garret Wecas, and Jesse "Drew" Zeck started coming up with ideas for their video right after the start of school. Their goal was to come up with an original idea that would resonate with their audience. Together they decided on "It Hasn't Happened Yet" as their theme, and Mr. Simmons was excited about the direction they were going with it.

"This year the idea was one I think everyone can relate to," said Mr. Simmons. "No one believes bad things are going to happen to them, but you never know what life is going to throw your way. The 'hasn’t happened yet' theme is one we thought might resonate with the judges/students and apparently it did. The end credits really drive that point home.  Getting the idea is just the first step but the students did a good job taking that vision and making it a reality.”

Video submissions were judged by a committee made of transportation officials, and winners were announced during the second week of October.

Jesse "Drew" Zeck, who starred in the PSA, couldn't believe it when he heard they had won. "We really didn't expect to win. This started as a creative side project for the class, and we had limited time and technology to put it together. I think the end result really shows how well we worked together."

Grand prize winners of the contest received $500 for their school and first choice of either an iPad, GoPro, or DJI Osmo Pocket. The boys unanimously decided on the DJI Osmo Pocket as their award.

Amanda Miller with the Kansas Turnpike Authority visited Lansing High School on October 21st to congratulate the boys and present them with their awards. "We see a lot of the same themes across the video submissions, and theirs definitely stood out from the rest. They had a unique message that resonated with the judges."